Well day 2 started off as any other day with a trip on the T-Bana from Sickla Kaj but today we stop at Gamla Stan, the Old Town. This well-preserved medieval living pedestrian city was founded in 1252. This little island is full of sites, museums, restaurants, cafes, bars and stores along narrow winding alleys that are perfect for a day of exploring the cobbled streets gazing at the many shades of gold buildings. You cannot get lost as this is an island and sooner or later you will find the water and then you can just follow the waters edge to find the Gamla Stan T-Bana Station. (text continues after gallery) 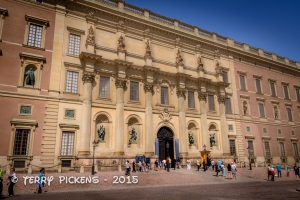 Our first visit after wandering around the streets in morning was Kungliga Slottet, the Royal Palace, a magnificent baroque style building. This is the King of Sweden’s residence with over 600 rooms on seven floors. To enter this residence we must first put all our bags and cameras (yes even phones) in a locker and don little bootees over our shoes to protect the floors and carpets. As with all European palaces this one does not disappoint in its opulence. What a shame we could not take any pictures inside to share but as with any of these palaces you must experience them in person to understand the grandness of the spaces.

After our long walk inside the Royal Palace we headed over to the underground Stockholm Medeltidmuseum (Museum of Medieval Stockholm). This museum is the largest excavation in Stockholm under the Riksdagshuset (Parliament House) and on Riksplan Plaza, this museum houses 55 feet of the original 16th century fortified wall, a 1520’s war ship and reconstructed buildings and artifacts from the time period. This was very interesting to see the life and history of the people of Stockholm during the 16th century.

We then decided to take a rest and went on our free Stockholm Card Historical Canal Boat Tour. What a nice 50-minute rest as we glide along the canals of Stockholm and see some of the 14 islands that make up Stockholm. 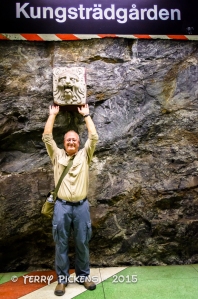 After our rest it was getting late so we walked a couple of blocks jumped on the T-Bana and headed over to Kungstradgarden Station, this is an underground station that was carved out of the rock and left in it’s natural state, no fancy walls covering the excavation. What a wonderful atmosphere with all the rock walls, statues and art decorating the station. The modern sleek pedestrian conveying equipment was in such contrast to the natural rock that it just looked absolutely correct and not out of place, thus showing the differences between man-made and natural; sleek, smooth, gleaming modern metal and rough stone work. We had an absolute blast seeing and exploring this one station and we understand there are several other stations that are just as impressive, wish we had more time to investigate them all. Oh well, another trip perhaps.

Well, back on the T-Bana we go to head back to our home base at Sickla Kaj to have dinner, visit the market (again), take care of personal business and rest, before we head out for our 3rd days adventure in the morning.