We both slept great until 6:00 am. We got ready and had our breakfast in the large dining room- baguettes, soft cheeses, homemade jams, yogurt, cereals, apple coffee cake, coffee, and OJ. Delicious!

We left the B&B and head to Bayeux city center to meet our Battle Bus tour guide and the 3 other couples sharing the full day tour. Our tour guide Allan, was a knowledgeable Brit, who has studied the Normandy invasions for 25 years and is a historical author. During the drive between stops Allan told us of local history and sites we passed relating to WWII and prior history of the area, he certainly made the drive interesting.

1st stop – Allan drove us to the small town of St. Mere Eglise, where some of the first airborne paratroopers landed, and we visited the Airborne Museum and Church Square. The early landings, at about 0140 June 6th, resulted in heavy casualties for the paratroopers. Some buildings in town were on fire that night, and they illuminated the sky, making easy targets of the descending men. Some were sucked into the fire by the vortex of the flames. Many paratroopers hanging from trees and utility poles were shot before they could cut loose their harness.

Later that morning, about 0500, a force led by Lt. Colonel Edward C. Krause of the 505th PIR took the town with little resistance. However, heavy German counterattacks began later in the day and into the next. The lightly armed troops held the town until reinforced by tanks from nearby Utah Beach in the afternoon of June 7th. This and most of the tour consisted of sites well chronicled in books and movies. The movie Allan kept mentioning was the “Longest Day”, which he considered documented the battle as accurately as any Hollywood has produced. 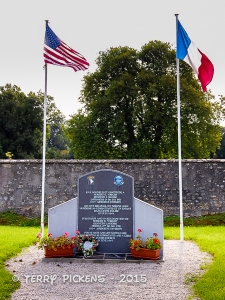 Stop #2 – This was a stop at a little know event during the invasion in an 11th century Norman church in the tiny village of Angouville-au-plain that became a medic station for injured paratroopers. Two American medics separated from their squads during the airdrop ran the station. They treated American, French and Germans alike, as long as they checked their weapons at the door. They ran the aid station unassisted for 3 days until help arrived to take the wounded to hospitals, several soldiers died in the church. We sat in the old wooden pews, blood stains still visible where the wounded lied. The church itself had many of its original windows blown out, the bell tower bombed, and the back door rammed by a tank. One shell that took out the bell tower landed and cracked the church floor, staying intact and never exploding, one of the medics threw the shell out the window and it laid beside the church until a demolition squad dismantled it.

Stop #3 – Lunch stop was at a small, sandwich shop owned by a British lady. We had a great ham and cheese baguette sandwich, bag of chips, candy bar, piece of fruit and a drink.

Stop #4 – Utah Beach was one of the smaller invasions beaches with the least amount of casualties. Utah Beach was the code name for one of the five sectors of the Allied invasion of German-occupied France in the Normandy landings on June 6, 1944, during World War II. The westernmost of the five landing beaches, Utah is on the Cotentin Peninsula, west of the mouths of the Douve and Vire rivers. Amphibious landings at Utah were undertaken by United States Army troops, with sea transport and naval artillery support provided by the U.S. Navy and elements of the British Royal Navy. The objective at Utah was to secure a beachhead on the Cotentin Peninsula, the location of important port facilities at Cherbourg.

Stop #5 – Point du Hoc, the main German battery that protected all the beaches from invasion. The German guns, armories, buildings, foundations of buildings, or what’s left still stand from that day. The top of the cliff and is pock mocked with craters from the American ships big guns and aerial bombing. Eliminating the armory would make for a successful invasion on Utah Beach. But when the troops finally took the cliff the guns had been relocated inland and the soldiers needed to find and destroy them.

Stop #6 – Omaha Beach was the bloodiest battle of the Normandy Invasion. Allan told the stories of individual, first hand accounts from WW2 vets who survived that day. The crescent shaped beach had a battery at each end for flanking fire from both sides as well as from the Germans shooting from the top of the cliffs. The road at the top of the beach and barbed wire rolls were never depicted in any movie about The Normandy invasions. The majority of injured and deaths occurred on Omaha Beach. The road was for the summer vacation houses of the Parisians; German artillery used these houses to site in their guns. The homes were destroyed much to the delight of the local Norman population.

Our final stop #7 – The American cemetery, is a very beautiful resting place high on the bluff overlooking the ocean, lined with marble crosses, in perfect rows, in every direction. We arrived at flag retreat, a powerful sight that stopped us in our tracks to watch and honor the fallen; we felt insignificant to the events that took place that day in this area that this represents. To see all those crosses, of literally mostly 18-early 20 year olds, was a mind boggling, moving, and powerfully sad experience. Reading the names and hometowns brought a realization to their horrifying ordeal and of their bravery. The number of unidentified soldiers is staggering, what those families must have gone through not knowing what happened to their sons, fathers, brothers and husbands. The cemetery is one of the few places outside the US considered US soil. The US Government runs the cemetery and hires the help as US employees even though they are French.

This ended our tour at 5:30, and back in the town of Bayeux we visit the Tourist Info center for maps and ideas of places to visit for our free day tomorrow. Now back to the B&B, to rest.