Well lets travel back in time with Mr. Peabody and his “Way-Back-Machine”. 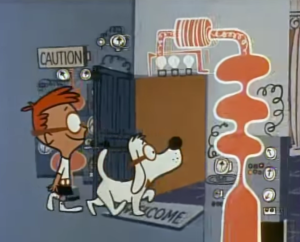 Let us set the time machine for September of 2001 and revisit a trip to England, Scotland and Wales.

If you are in London and will be visiting sites for a few days, I would suggest The London Pass (LINK), this will get you free entry into 60 museums, tours and attractions; fast track entry; free 1-day Hop-on-Hop-off Bus tour; a free guide book; an optional Oyster Pass for transportation; and more.

I highly recommend the Tower of London tour (LINK) by the Beef  Eaters (the Tower guards) who are the ceremonial guardians of the Tower of London. In principle they are responsible for looking after any prisoners in the Tower and for safeguarding the British crown jewels. In 2011, there were 37 Yeomen Warders and one Chief Warder who have been conducting guided tours since the Victorian era.  All these men are retired from the Armed Forces of the Commonwealth realms and must be former warrant officers with at least 22 years of service,they must also hold the Long Service and Good Conduct medal. 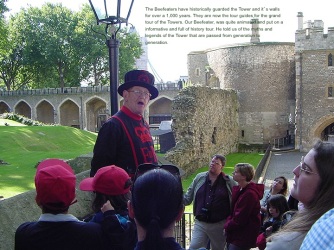 So now on with the tour.

The Tower of London has played a prominent role in English history having been besieged several times, and the Tower has been important in controlling the country. This is the oldest palace, fortress and prison in Europe. The tower fortress is the 118 by 105 ft (36 by 32 meters) by 90 ft. (27 m) high named the White Tower (the Keep) which is an example of Norman architecture. The Tower was founded and built nearly a millennium ago by William the Conqueror on the River Thames  to assert his power over London. First started in 1078 building at the castle has been constantly ongoing, The Tower of London has been expanded many times over centuries. This specific site was chosen by William as it was the site upon which the Roman Emperor, Claudius, had built a fortress more than a thousand years before. Traces of the Roman wall can still be seen within the Tower. 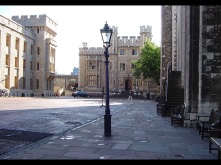 The Tower was originally built as a timber and stone palisade with a ditch along the north and west sides. Construction over the years has added towers, buildings, and walls transforming the original fortress into what we enjoy today.

Somewhere around 1240 the Tower became home to King Henry III.  After he whitewashed the tower the Normans started calling the tower ‘La Tour Blanche’ [The White Tower]. He continued to construct a church, and added a great hall and other buildings. Thus the White Tower became a residential palace and fortress suited for a king and queen. It now houses one of the museums on the grounds. 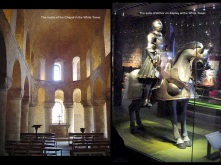 Chapel and Armor in the White Tower 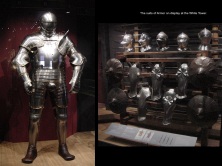 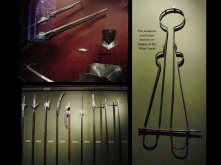 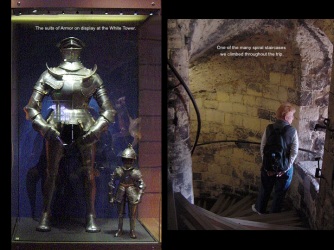 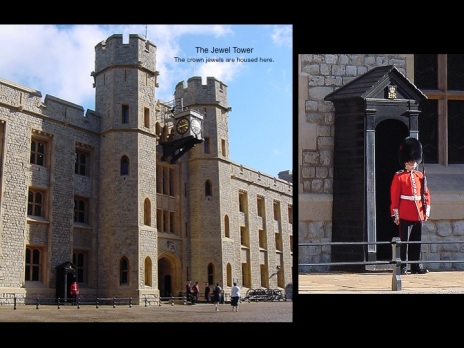 The Tower of London has been used as a prison and for many it was the last sight they saw on earth; as a home for kings and queens; and as the royal mint and treasury. Today it houses the Crown Jewels and is the keeper of the Royal Ravens. These ravens are flightless birds due their wings have been clipped. This tradition points to a superstition that the English still believe dating back from time of Charles II, that if there were no longer ravens in the Tower both the White Tower and the Commonwealth of England would fall. 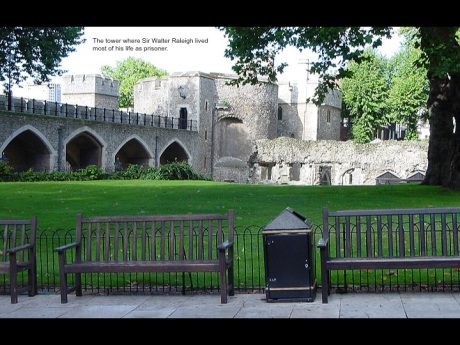 The Bloody Tower was built around 1280 to control the main river entrance to the Tower of London. Known originally as the Garden Tower its name changed due to the murders of two young Princes, thirteen year old Edward V and his brother, Richard Duke of York that supposedly took place there. One theory states they were imprisoned in the Tower of London by their uncle, Richard Duke of Gloucester, so that he could attain the crown as king of England, after their fathers death.

Another individual imprisoned in the Bloody Tower was Sir Walter Raleigh. While there, Raleigh wrote his History of the World, which was published in 1614, four years before he was beheaded. Raleigh lived in the tower for thirteen years in two rooms on the second floor. Raleigh was beheaded in October 1618 in the Old Palace Yard at the Palace of Westminster.

Most beheadings took place outside the Tower walls but those taking place within the walls of the Tower grounds were of royalty, those that lost there lives included William Hastings, 1st Baron Hastings 1483; Queen Anne Boleyn, second wife of King Henry VIII, 19 May 1536; Queen Catherine Howard, fifth wife of Henry VIII 13 February 1542; Jane Boleyn, Viscountess Rochford 13 February 1542; Lady Jane Grey, the “Nine Days Queen”, wife of Lord Guildford Dudley for High treason, on 12 February 1554; and Robert Devereux, 2nd Earl of Essex for treason on 25 February 1601. All were beheaded with an axe except for Anne Boleyn who was beheaded with a sword. 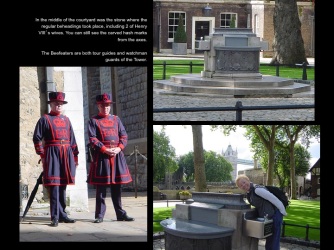 So if you get the chance, go have a fun history tour, don’t miss seeing the crown jewels, the 2 museums and enjoy the historical adventure.

Tower of London from Tower Bridge 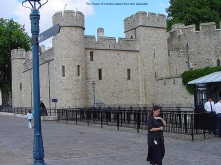 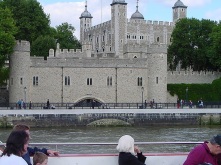 Tower of London from Thames

Tower of London from Thames

2 thoughts on “The Tower of London”