Well over the 4th of July I decided to visit my son, daughter-in-law and 2YO grandson up in Vancouver, WA. My daughter, 12 YO grandson and 9 YO granddaughter tagged along for a 7 day adventure. Daughter only got to go 5 days, as she had to fly back for work on the 5th.

After an 18-hour straight through drive up there on Saturday, we arrived about 8:30PM. Tired we visited for a while then all went to bed.

Sunday we got up and lounged around the house, went to the store for a few food items, and visited. In the afternoon we had a very nice late lunch with extended family then it was off to go shopping for our 4th of July fireworks. WOW, county land up here has all kinds of legal fireworks available, from minor fireworks we can get down home in Orange County, CA, to the rockets and mortars that will provide us with a Disney-style extravaganza. 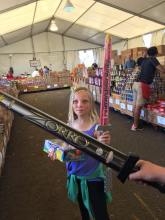 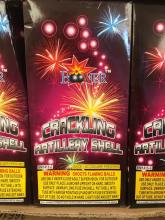 Now these are fireworks 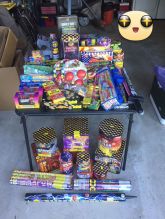 This will make for one fun evening

Monday the 3rd was scheduled to be an adventure day away from the house so we loaded up the vehicles and headed to the Gifford Pinchot National Forest east of the city and our first stop at the Guler Ice Cave and lunch. 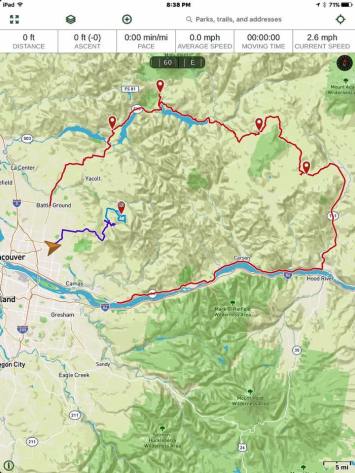 Our path for the day 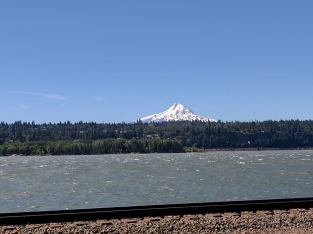 Discovered more than 100 years ago this 9,000-year-old cave was shown to settlers by Native Americans and used for providing ice for the surrounding towns. We only explored the first 120-foot section of the cave as the floor was way to slippery from the ice even for our well lugged hiking boots. Such a fun place to explore it would be nice to come back here with adequate footgear or later in the year to explore the rest of the 650-foot long cave past the 3 collapsed sinks. The only place we explored was the Ice Lake and Crystal Grotto right around the main entrance ladder. Bring electric lanterns, flashlights and headlamps as it gets mighty dark real fast the further from the opening you get, good sturdy footwear as the ground is slippery and very uneven and also wear warmer clothing, as it might be 90 degrees up on the surface but in the high 30’s low 40’s in the ice caves. 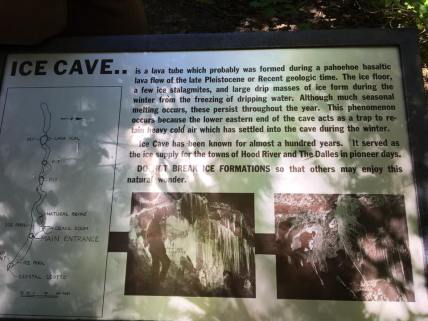 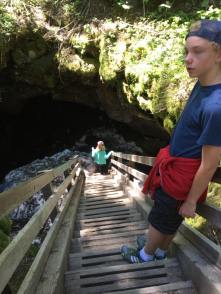 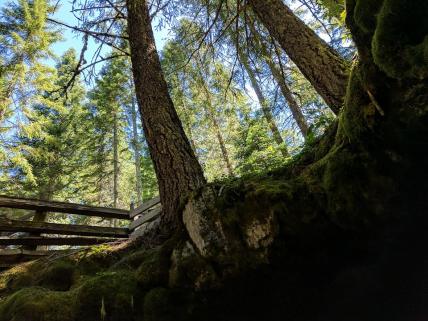 Looking out from Guler Ice Cave 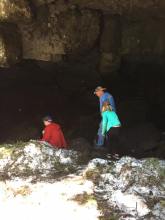 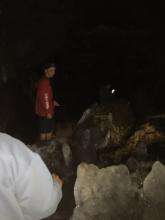 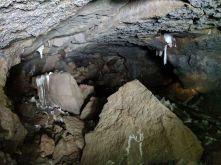 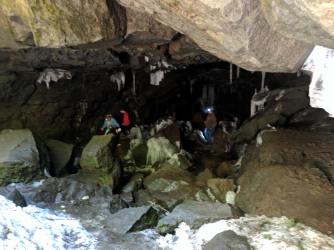 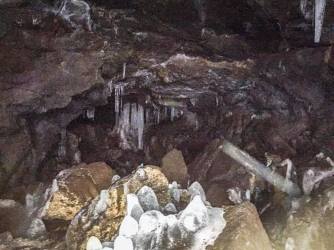 Just down the road from the ice caves are the Natural Bridges, a partially collapsed lava tube creating a sharp edged canyon with still intact sections creating the bridges.

Leaving we head to our next stop along dirt National Forest trails to Ape Cave. We stop at one turnout to let the kids stretch their legs that has a wonderful vantage point of Mt Hood. Our 2YO grandson was having fun throwing the rocks from the parking lot trying to hit the distant Mt Hood. 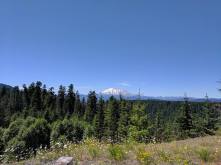 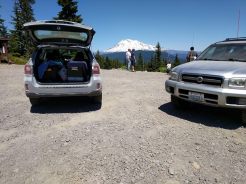 Cousins having fun at the rest stop 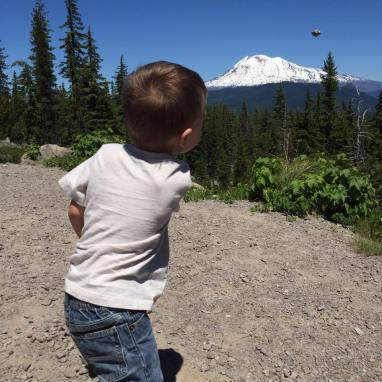 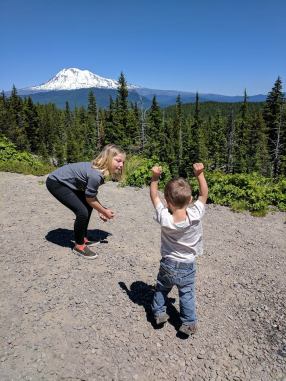 I hit Mt Hood with that last one

Back in the vehicles we continued to Ape Cave  in Giffrord Pinchot National Forest. Discovered in 1947 by a logger this 13,042-foot long lava tube formed 1,900 years ago from an older eruption of Mt St Helens. This has been the only time she has spewed red hot lava in her 40,000 years of activity.

The cave got it’s name in 1951 from a group of scouts who called themselves the St Helens Apes who explored the cave.

The main entrance to the cave is not at the end of the cave but at about a quarter point that you access down a collapsed section of the roof. When you enter you have 2 options, go the easy lower route, ¾’s of a mile one way or a much more difficult 1-½ mile uphill jaunt over lava falls and very uneven ground. The difficult trail has a ladder at the far end and a surface trail to return to the parking lot.

We decided to take the lower easier section with our group of kids. The sandy floor bottom is easily managed with only a few sections to scramble due to collapsed ceilings. Dark isn’t a good enough word when you get deep into the cave and turn out the lights, it’s hard to explain the utter darkness that surrounds you. Take very good, powerful lights with fresh batteries, as you would not want to loose light in this cave. We had some very good flashlights that were powerful on the surface but the blackness of the cave sucked the light up and we thought we had some bad batteries in them. Returning home that night and trying them again showed us just how much light is taken by the utter blackness of the cave. On camera flashes are also very weak in the caves.

Heading down into Ape Cave

The end of the line in Ape Cave

The kids loved the exploration and went right to the end, or at least as far as I could negotiate without crawling too far on my hands and knees with the cave ceiling brushing my back. The walk seemed to take a long time for 3/4’s of a mile so just hang in there and keep walking. Next time we will come here first and I might try to take the older grandkids on the more difficult route.

This is a slide show of the more difficult upper cave by another explorer.

Again take 3 kinds of lights, lantern, flashlight and headlight, dress warmly as it is in the low 40’s down there, wear sturdy shoes preferably hiking boots, and be with a friend or tell someone where you are going. Be respectful in the caves as the ecosystem is very fragile so no food or beverages, NO SMOKING, no rock collecting, no pets, and try not to touch delicate formations or the walls as the oil on your hands will harm them. Once damaged the cave will not repair its self as the surface area does.

After the long exploration of the caves we head home. It is only a 1-hour drive away from the house but we stop in Battle Ground, WA at a diner for dinner. We were so hungry and the food looked so good we all forgot to take pictures but “Old Town Burger and Breakfast” was the place to stop to fill your empty belly. Tucked back in a small shopping center off Hwy 503 on W Main St, the food was delicious and the staff was outstanding. Such a nice little place for us to eat and I will be back many times it was that good. 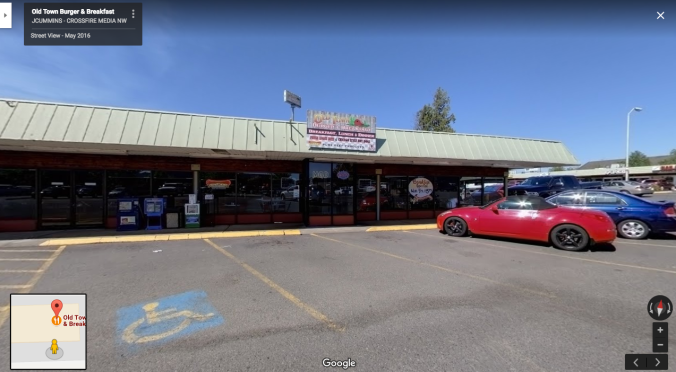 In memory of Bruce Meyers passing. I loved this Manx authenticated by the Meyers Manx Club. @meyersmanxinc
Got a bit of snow @vancouver_usa
Merry Christmas and Happy Holidays to one and all.
Happy Halloween everyone
I have always loved the photos I’ve seen of this barn in Grand Teton NP. I finally was there without the mobs of people. I so like the outcome of these. @grandtetonnps
Yesterday on the way home I stopped at Craters of the Moon National Park. Got to the park right at sunrise. @cratersofthemoon_nps
Follow TVP Journeys on WordPress.com