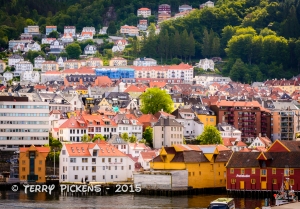 We get up early and head to the Windjammer Cafe for an early breakfast and we actually arrived before they opened. After the filling buffet we walk down to deck 4 to watch the docking at Bergen, Norway. The sequence of events at docking is pretty entertaining at times. We notice one gentleman has run the show at every port, we watch as he directs other crewmembers and dockworkers to secure the gangway so everyone can exit safely and comfortably, but sometimes that is a little more difficult than others. One time the tide must have been out as there was very little headroom for taller passengers to exit the doorway and a very narrow area to place the gangway. They tried several different angles but to no avail and must get out some foam padding to protect heads from banging on the top of the opening. 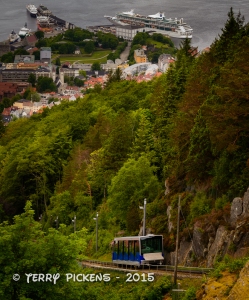 After watching todays entertainment we hear the announcement that we can disembark so Jodi and I head straight for the Floibannen Funicular for the trip to the top of 330 meter tall Floien Mountain Top Viewpoint. What a dramatic view of Bergen, we have a 180 + degree views of the large city spreading out below us. Bergen is the second largest city in Norway at 278,100 population behind Oslo. Founded in 1070AD on the shore of the Beyfjorden Fjord under the Seven Mountains, Bergen was founded as a Handelsknutepunkt (a crossroads for trading) and today is an International Center for shipping, aquaculture, offshore oil exploration and subsea exploration.

After returning to the town we wander the streets and alleys of the Bergenhus and Arstd Boroughs and end at Lille Lungegardsvannet (a lake) in Festplassen Park.

We have had great weather till today as it started to rain during our walk. We continue back to the water along the Torgallmenningen pedestrian street toward the Sjofartsmonumentet (Seafairers Monument) and the harbor. At the end of the harbor is a wonderful Fish Market full of stalls selling fish, fruits, vegetables and flowers.

After walking up and down the aisles of the market we cross the street to visit the UNESCO World Heritage site of Bryggen (Tyskebryggen) a German Wharf of Haneseatic Commercial Buildings dating from 1360. This was the regions center of commercial activities and is now a warren of alleys housing shops of all kinds.

We have had such a wonderful day, even in the rain, but we are getting tired and wet so we decide to go back to the ship for lunch, dry off and relax for a while as the rain is now coming down even harder. Tomorrow is our last day on the ship and it will be a sail day but after lunch, with all the walking we have done in the last 2 weeks and the rain still falling hard we decide to call it a day. It is sad as we will miss some of the many attractions of Bergen, but then again there is always next trip.