After a restful nights sleep I make a small breakfast, pack up and head out for the short 1-hour drive across the Columbia River into Oregon for a visit to Fort Stevens State Park. Located in the far northwest tip of the state this park is bordered on 1 side by the mouth of the Columbia River and on  second side by the Graveyard of the Pacific This 4,300 acre (17.4 sq km) park has much to offer to its visitors; walk or drive along the beach, hike coastal and forested paths, bicycle along bike trails, camp, beachcomb, birdwatch, visit a shipwreck, explore an abandoned military installation used during the Civil War and World War II. Or just relax and enjoy the area.

My first stop was to see one of the shipwrecks along this stretch of the Graveyard of the Pacific. Along with approximately 2,000 other ships since 1792, the remains of the Peter Iredale now rests on the sandy beach. Only a portion of this 275 foot (83.8 m) long steel ship remains, grounded where she came to rest in 1906 from a navigation error in dense fog by its Captain due to the areas treacherous weather and storms. It has become an attraction since the day it grounded on the sandbar.

Graveyard of the Pacific 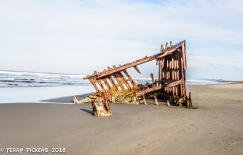 Next stop was Fort Stevens. First built in 1863-64 during the Civil War it was in use up until the end of World War II, it was part of a 3-fort system at the mouth of the Columbia River to defend this waterway and ports from attack by sea. The other 2 forts were located in the state of Washington; Fort Canby at Cape Disappointment and Fort Columbia a few miles up river from Fort Canby. (For my visit to Fort Canby and Cape Disappointment see LINK)

View of Steam Plant, West Battery and Battery Pratt (from left to right) 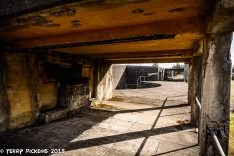 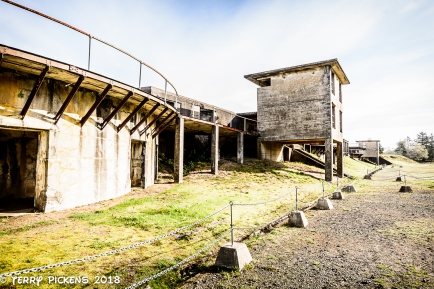 Protecting the waterway to the ports of Portland and Vancouver

Protecting the waterway from attack

Inside of Battery Clark

Inside of Battery Clark

During World War II a Japanese submarine fired upon Fort Stevens in June of 1942, making this fort notable as being the only military base on the Continental United States to be fired upon by an enemy since the War of 1812. 17 rounds were fired at the fort with no real damage being done.

After a full morning of exploring the buildings and small Fort Stevens Visitors Center – Museum I enjoyed a late picnic lunch and continued my journey south on Highway 101 to visit Ecola State Park. This 9 mile (14.5 k) long stretch of beach lets you enjoy hiking, picnicking, tidepooling, surfing and scenic coastal vistas. Located just north of Cannon Beach, OR I leave Highway 101 and travel the13 miles (21 k) of twisty narrow roadway into the north area of the park to see Indian Beach Day Use Area. This secluded beach is a spot frequented by surfers, beachcombers, and tidepool explorers and is reached along a short path down the hillside to the beach. Extending north is a network of trails that will provide a 2 ½ mile (4 k) loop trail to the top of Bald Mountain or continue north to Tillamook Head trailhead which is part of the Oregon Coast Trail. The loop trail is part of the Lewis and Clark National Historic Tail, walked by Lewis Clark and a band of men from the Corps of Discovery to search for a beached whale in 1806. They were hoping to return to Fort Clatsop with whale blubber as they fought hunger from their time there. They sadly return empty handed. 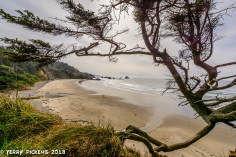 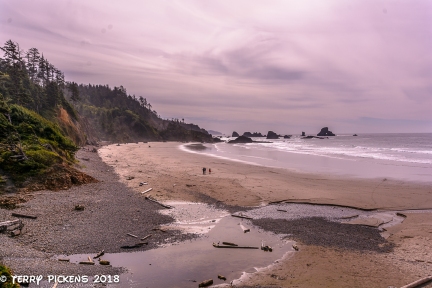 After this beautiful day of exploring I returned to my car and drove the 2 hours back to my home to plan the next trip in a few weeks, south to visit my family and friends at the home I just moved from.