We take a day to rest, clean and organize our things from the adventure at Tillamook State Forest then decide to head north from Vancouver, WA for a day trip to Battleground Lake to enjoy the nature surrounding it. Being winter it is raining off-and-on today, so we go down to the lakeshore so my grandson can have some fun trying to fill the lake with rocks he finds on the shoreline. This is something he really enjoys, he has thrown rocks at Mt Adams, into the Snake River in Grand Teton National Park and now here. Kids are so funny how they entertain themselves. We discussed hiking the trail that goes around the lake but decided that with the rain it would just be a slick mess.

After our short stay at the lake we head to The Cedar Creek Grist Mill just outside Etna south of the Lewis River along scenic Cedar Creek. A gristmill grinds grain into flour using nature’s forces, usually water being run by a water wheel. The first water-powered mill was reported around 71 BC in Asia Minor. Grain mills in England were counted in the 1086 Domesday Survey In England, which stated there were 5,624, or about one for every 300 inhabitants that year, peaking to 17,000 by 1300.

Cedar Creek Grist Mill is a working museum allowing visitors inside to observe the workings of the mill built in 1876. Samples are given to visitors after the tour of the facility. This is a totally nature driven mill using the water flowing through a plumb to a Leffel turbine installed with its flume (water canal) around 1888. Pulleys, and belts turn the milling stone producing flour, corn meal and sometimes apple cider. 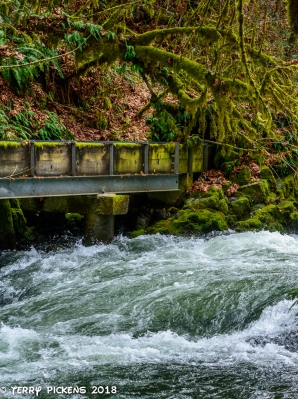 Resting on a steep and rocky slope in the narrow gorge of Cedar Creek, it is the only gristmill in Washington that still maintains its original structure, mills with stones, and is water powered, this is also the oldest building in Washington State still producing its original product. 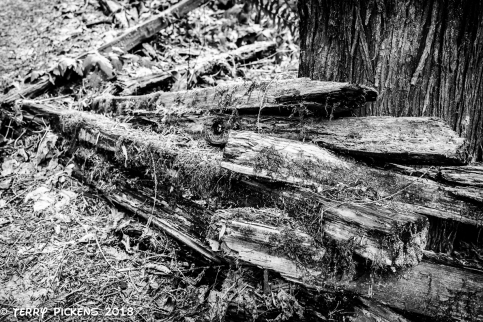 Debri along the creek

some of the lush ferns along the creek

The last owner died in the late 1950’s and the property was bought by The State Fisheries Department in 1961 that removed the old dam and built a fish ladder. The Fort Vancouver Historical Society leased the mill in 1961 and had it registered as a National Historical Place.

Time, weather and vandals took its toll by 1980. “The Friends of the Cedar Creek Grist Mill”, a non-profit corporation, was formed to save the old mill. Using period tools consisting of axes and adzes they replaced the damaged posts and beams. Due to a dam removal in 1961 they had to now get water into the mill, extending the flume 650 feet where the water from the creek could flow into the intake without the dam.

Next to the mill is a covered bridge across Cedar Creek. There is no history on the first bridge although it was completely replaced by a truss bridge in 1935. The 1935 bridge could not support heavy loads, so in 1994 a new covered bridge spanning Cedar Creek was built. 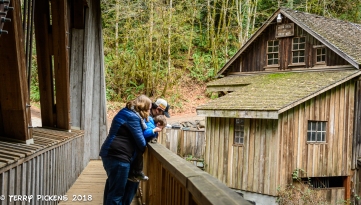 Standing on the covered bridge

Sadly it was closed on this weekday right after the holiday but peeking in the windows demands a return visit when it is open.

This adventure was so much fun, I want to go back in a few years. Happy New Year everyone
Got a bit of snow @vancouver_usa
Merry Christmas and Happy Holidays to one and all.
Happy Halloween everyone
I have always loved the photos I’ve seen of this barn in Grand Teton NP. I finally was there without the mobs of people. I so like the outcome of these. @grandtetonnps
Yesterday on the way home I stopped at Craters of the Moon National Park. Got to the park right at sunrise. @cratersofthemoon_nps
Follow TVP Journeys on WordPress.com
Loading Comments...